When I was a child, my favourite board game was Snakes and Ladders. I played no other board game—none of the others interested me. I must have played Snakes and Ladders every day of my childhood. When I had no one to play with me, I would play as the two players all by myself and roll the dice twice until one of my buttons reached the magical one hundred score at the top of the board.

Then I would begin to play the game all over again.

The game of Snakes and Ladders is based an ancient Indian board game played between two or more players on a board featuring numbered squares. Depending on the version, there is a random number of ‘ladders’ and ‘snakes’ on the board which always connects two specific board squares. If you roll the dice and land at the base of a ladder, you move up the board. If you land on the head of a snake, you move back down the board. Later on in life, I found out that the Indian version of the game is actually a morality play of sorts, representing the players’ virtues (ladders) and vices (snakes), and was known as Moksha Patam, emphasising the role of fate or karma in the Hinduism consciousness.

In terms of my personal journey into and out of the labyrinth of the psychopath, it has begun to dawn on me how this game is a pictorial allegory of the long, strange trip I’m on, and how playing this game as a child feels like precognitive insight into the underlying theme of this book. The snakes represent the hyper-active Reptilian Complex of the consciousness parasites, the psychopaths and the manipulators who hold us back from reaching our full potential.

The ladders on the other hand represent the DNA double helix assisting one’s individual journey of personal evolution to the next level of human consciousness (number one hundred) which we activate through epigenetics and creativity intentions. When we land on the head of a snake during our final steps at the end of the game the slide down always becomes a learning experience. The lesson we learn is that we are still very much in a game and we will all eventually win if we keep playing. Matters not who reaches number one hundred first, all human players will arrive there.

When we are targeted and personally damaged by a psychopath and/or oppressed by one of the consciousness parasites manifesting from the Psychopathic Control Grid, we still remain ‘on the board’. We are still in the game. Psychopaths can only slow our growth in personal consciousness, they can’t stop it completely. One way or another, every player of Snakes and Ladders will reach one hundred. Psychopaths are always trapped at the head on the snake. This prevents them from reaching the end of the game and enjoying the satisfaction of playing to the full experience; the reptile in their brain is always their undoing.

There is meaning to the pain of having been in a psychopathic relationship or situation. The consciousness parasite feeding on your life energy are there to be defeated; the dragon left inside your psyche must be slain. Your post-traumatic stress is real. You have been moved down the board by the snake inside the mind of the psychopath, and you are experiencing changes based on learning from your journey up (and down) the Snakes and Ladders number grid.

The solution to this is always the same: to roll the dice and keep playing the game.

Move forward, find meaning and you will eventually land on a ladder to move you up towards consciousness evolution. Th is is why psychiatry is not your friend in this situation. You are an individual and your psychopathic abuse situations were unique to you alone. You must walk the path to recovery on your own unique journey. Humans are not meant to be robots all doing the same thing and thinking and living to the same script. We are all different with varied gifts and unique talents. Most of these gift s are ignored as they are outside of the tiny box of mainstream belief. To begin moving up the board again from your fall down the snake, listen to your intuition, pay attention and understand.

Lose the fear and roll the dice again.


Thomas Sheridan is an independent alternative artist, author, satirist, musician, public speaker, broadcaster and researcher currently based in the West of Ireland. His illustrations have appeared on the covers of newsstand magazines, books and websites worldwide.

The Anvil of the Psyche is considered a vital manual for personal and social survival in a world controlled by greed and false hopes. Thomas' writings and interviews have evolutionised people to build a firewall around their own psyche and not to be lured into handing over personal independence to an exterior collective or guru. As a result, his NO CONTACT EVER AGAIN philosophy applied to controlling individuals and groups has made Thomas an enemy of mind-controlled death cults and neo-Nazi fringe groups.  Thomas has also been featured in several films and documentaries.
Posted by Thomas Sheridan at 5:33 PM 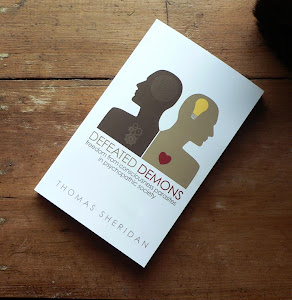